In this episode, Dassetu talks about love and attachment, and the key to happy, healthy and loving relationships from a Buddhist perspective. For a lot of us, if someone was to ask us “what would make your relationship with your partner better?” our answer would be something that our partner should do differently. It may even be a whole list that we have prepared. But as we venture on the path of meditation and self-inquiry, we realise that, as with everything, our relationships are subjective and the happiness, joy and love we seek must come from within. By bringing love and joy to the world and avoiding the extremes of aversion and craving, we can have happy, healthy and loving relationships with everyone we meet.

Listen now on your favourite app...

What is the Samadhi Podcast?

The Samadhi Podcast is a series of bitesize talks and guided meditations that help you become a happier, more peaceful and positive person. Learn how to calm the mind, deeply relax, gain control of feelings and emotions, find inner strength, and let go of negative states of mind such as stress and anxiety by developing a positive approach to life.

Samadhi is a small LLP run as a not-for-profit organisation. We are run entirely by volunteers, and no payment is given to teachers or administrators for their service. Everyone involved in Samadhi gives their time or financial support solely through their wish to share the benefits of the teachings with others. Through your generosity, whether you can offer a small amount of your time or a gift, we will be able to continue making important contributions to our community through The Samadhi Podcast, this website & our retreats and courses. Read more 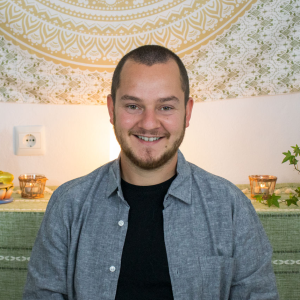 David (also known as Dassetu, a Pali term simply meaning ‘one who points out or shows’) is an experienced contemplative, meditator & meditation guide who has studied the mind, meditation, and Buddhism for several years. He is the Founder of Samadhi. In his own practise and teachings, David focusses on the core themes of Early Buddhism and emphasises the practices of Shamatha (meditative quiescence), and it’s union with Vipassana on the Four Applications of Mindfulness and the Four Immeasurables – which presents a direct path leading to the realisation of our deepest nature and the potentials of consciousness, and closely follows how the Buddha himself attained enlightenment. He considers himself to be the fortunate student of many teachers, including his root lama, Lama Alan Wallace, Drub-la Tsampa Karma, H.E. Garchen Rinpoche, Gyatrul Rinpoche, Chamtrul Rinpoche, and Zopa Rinpoche, Dhammachariya Paññadipa (Michael Kewley) and Bhikkhu Kakmuk

In Conversation with Charlotte Adler (Healing Trauma Through Meditation and R.A.I.N.)

Join us for a seminar on overcoming anxiety using the natural abilities of the mind, body and breath.

Join us for a seminar on overcoming anxiety using the natural abilities of the mind, body and breath.

By using ancient meditation techniques we can learn to control the mind, let go of the inner causes of anxiety and worry, and start to live in the present moment with a calm, and happy mind.

The session will consist of an inspiring talk on overcoming anxiety, guided meditations, and a chance to ask any questions.